With the range of infrared cameras on the market today, it may be difficult for end users to know which camera is best suited to their application. There are longwave, midwave, and shortwave camera systems — each with its own advantages for specific industries and uses. The most common infrared cameras are sensitive to energy in the longwave portion of the electromagnetic spectrum, generally defined as wavelengths between 8 and 15 micrometers (µm). Because longwave IR (LWIR) can be detected using an uncooled sensor, these cameras are typically lower cost handhelds. Midwave cameras (MWIR), which are sensitive to wavelengths between 3 to 8 µm, require cooling for the detector. These cameras are more sensitive and offer higher frame rates than longwave cameras and are generally more expensive.

In this article, we will focus on an option for high temperature processes that few users consider: shortwave infrared (SWIR). SWIR cameras are sensitive to shorter IR wavelengths between visible light and 3 µm; they have historically been used exclusively for qualitative imaging applications like laser beam profiling, silicon wafer inspection, and imaging through layers of paint/ink and not for actual quantitative temperature measurement applications. Now, with the addition of temperature measurement capabilities, SWIR cameras offer a win-win for anyone concerned with thermal analysis of high temperature materials or processes.

Some high-temperature applications, such as metal processing and welding, take place within furnaces or environmental chambers designed to maintain a particular atmospheric condition or temperature. Those chambers generally have windows made of ordinary silica-based glass, which is opaque at longer wavelengths. These chambers must be fitted with windows made of materials such as zinc selenide or calcium fluoride in order to be transparent to LWIR or MWIR. These materials are not only more expensive than silica-based glass, but they also may not be able to handle the environmental conditions of the chambers — the heat, humidity level, or vacuum — as well as glass can.

Another consideration is that the amount of thermal energy materials emit can vary. This variation occurs not just between different materials, but between the same material at different temperatures or at different stages of processing. These changes in the emissivity can throw off the accuracy of a temperature measurement — an effect that is much more pronounced at longer wavelengths than at shorter ones.

Fortunately, SWIR cameras that are calibrated for temperature measurements can overcome both of these challenges. Shortwave cameras can see through glass easily and are able to measure temperature accurately despite emissivity variations. We will cover emissivity in detail later in this article.

In metal processing operations, it’s important to know the temperature of the material as it’s being worked. To make steel plates, for instance, manufacturers start with a lump of molten metal and roll it back and forth through a rolling mill to achieve the desired thickness. The steel needs to maintain a certain temperature throughout the process because compressing it at too low a temperature can change its material properties and lead to weaker or more brittle steel.

Additive manufacturing, also known as 3D printing, is another process for which high temperature consistency is vital. One form of 3D printing works by depositing a metallic powder and then using a laser to quickly heat the powder, melting and fusing it into a solid piece. A similar version relies on an electron beam rather than a laser to melt the metallic material. As with traditional steel fabrication, the temperature at which the material is processed can affect its final properties. People developing recipes for additive manufacturing processes need to know whether their laser or e-beam has the correct amount of power, is focused correctly, and is moving over the material at the right speed to impart the right melting temperature. The powder has to melt enough to mix together and form a single piece with no gaps, but not so much as to drastically alter its properties. Because the process is additive — building complete pieces by depositing successive layers of material — developers need to know how rapidly the previous layers cool in order to determine whether the new layers have sufficiently fused together.

In these applications, accurate temperature measurement of each process is critical in ensuring that quality parts are produced on a consistent basis. With a temperature-calibrated SWIR camera, users can get a complete thermal profile of the end-to-end process. The 2D detector array provides a clear picture of the thermal patterns and gradients as parts are formed, while also providing the temperature data for every pixel in the image. This is perfect for providing quantitative data for more in-depth analysis. And with the ability to accurately measure temperatures up to 3,000°C, there is no concern of missing a critical temperature threshold.

The Science Behind SWIR

SWIR light is often defined as being within the wavelength range of 0.9 to 1.7 µm, but it can extend up to 2.5 µm. These wavelengths are just slightly longer than those of visible light (0.4 to 0.7 µm) but shorter than the thermal portion of the electromagnetic spectrum that’s considered MWIR (3 µm). Typically, SWIR cameras use an indium gallium arsenide (InGaAs) detector, which is sensitive in the 0.9 to 1.7 µm range, though other materials such as mercury cadmium telluride (MCT) and lead selenide (PbSe) have some sensitivity in the SWIR band.

Thermal cameras detect the amount of radiant energy coming from an object, which varies with the wavelength and temperature (See Figure 1). Objects at lower temperatures emit more energy at longer wavelengths; as the object heats up, the peak energy emission shifts to shorter wavelengths. That’s why the metal burners on a stove are initially dark but take on an orange glow as they heat: the thermal energy has shifted from IR to visible wavelengths. A blackbody radiator heated to 3,000°C, for instance, emits only 1.5 units of radiance in LWIR, but in SWIR, the same 3,000°C blackbody emits 100 units of radiance. SWIR cameras, therefore, are much more sensitive at high temperatures.

At room temperature, most of the energy a SWIR camera detects comes from reflected light. This is why the camera is often used for imaging applications such as seeing through layers of paint in art restoration, profiling short wavelength lasers, or monitoring the water content in agricultural products. But once an object’s temperature rises above 300°C, thermal energy starts to become the dominant emission. This allows a SWIR camera to be radiometrically calibrated to measure temperatures from 300°C to more than 3,000°C. 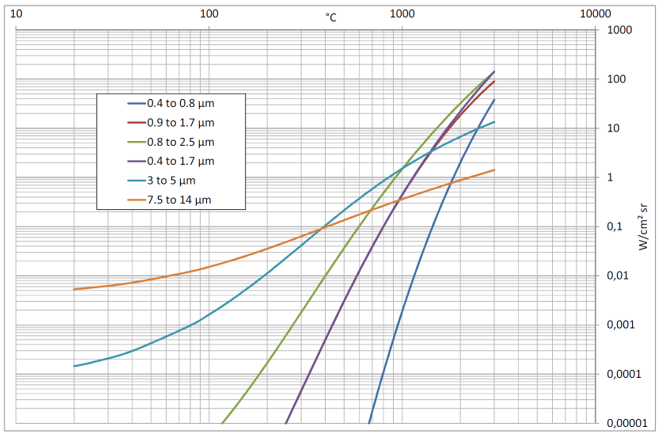 It’s the radiometric calibration that makes the difference between a SWIR camera used solely for imaging and one that can be used for temperature measurements. The process for calibrating a SWIR camera is similar to that of MWIR and LWIR cameras. Using blackbodies, manufacturers take a number of measurements at known temperatures, radiance levels, emissivities, and distances to create a table of values based on the output values from the camera at each temperature.

Once the camera output values for each blackbody temperature measurement are entered into the calibration software, the data is passed through a curve-fit algorithm to produce the appropriate in-band radiance versus output values based on the camera’s normalized spectral response. This produces a series of calibration curves (see Figure 2), which are stored in the camera system’s memory as a series of numeric curve-fit tables that correlate radiance values to blackbody temperatures. When the system makes a measurement, it takes the camera’s output value at a given moment, goes into the appropriate calibration table, and calculates temperature. 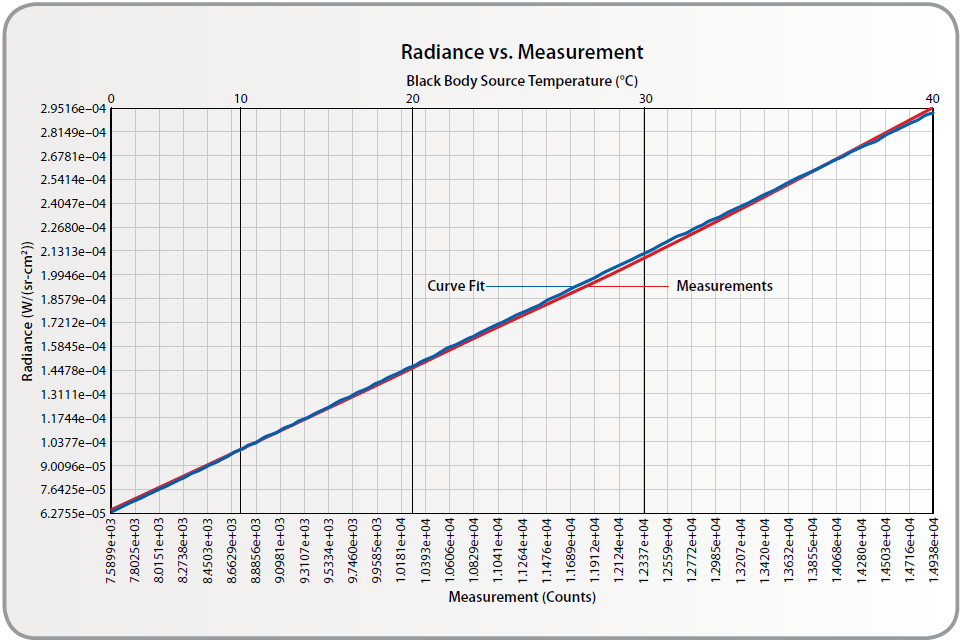 Fig. 2. Example of camera measurements and corresponding in-band radiance values for given black-body temperatures with resulting radiance vs. measurement curve

Emissivity values can vary during high-temperature processing. Running a steel plate back and forth through a rolling mill, for instance, alters its surface slightly every time, changing its emissivity. At short wavelengths, those small changes only introduce a small error into the temperature reading. At long wavelengths, the same error might throw the temperature off by tens of degrees. Rather than trying to adjust for changes in emissivity on-the-fly, it’s simpler to use the part of the spectrum that produces a smaller error (see Figure 3).

In additive manufacturing using metallic materials, emissivity changes as the material is heated and rapidly cooled under varying chamber and surface conditions can make it difficult for LWIR or MWIR cameras to accurately measure temperatures of the melt pool. In these types of high temperature measurement applications, even small changes in emissivity can result in larger errors. A calibrated SWIR camera reduces the measurement error, providing a more useful temperature feedback when attempting to optimize the system.

With their wavelength and measurement advantages, calibrated SWIR cameras can be the right choice for specific high-temperature applications. SWIR cameras can see through ordinary glass into chambers where high-temperature processes take place, making it a more affordable option than installing a special material for LWIR or MWIR cameras to see through. Physics also come down on the side of SWIR, because more thermal energy is emitted in the SWIR band at higher temperatures. The impact of an error in emissivity is also greater at longer wavelengths — another advantage for SWIR. Because that effect increases with temperature, LWIR measurements can be off by tens of degrees as the heat rises. SWIR cameras provide more accurate thermal readings when measuring higher-temperature objects, even with errors in emissivity estimates. In short, for the right type of application, calibrated SWIR cameras are the better option for measuring high-temperature processes.