Once thought too expensive – and perhaps too exotic – for use in medical research, infrared (IR) cameras are now emerging as an essential solution for providing safe and accurate temperature measurement. This shift is taking place not only in the medical research field but across industries, with independent research projecting the use of IR cameras will double by 2020 as the technology continues to improve and costs continue to decline. Simply put, medical researchers are turning to IR cameras because they like the way they work and the results they deliver, producing reliable data in a way earlier temperature measurement tools could not.

Collectively, these attributes are making IR cameras an indispensable tool for discovery in a wide range of cutting-edge research fields from the conception and design of tests and experiments through their successful execution. The following is a closer look at how IR cameras are being deployed and the positive contribution they are making in three emerging medical-research fields: brown fat studies, mosquito repellant research, and next-generation dental drill testing.

Brown fat is a key store of fat that allows mammals to hibernate and serves as a rapid source of energy in human babies. Scientists have linked brown fat to non-shivering thermogenesis: a phenomenon best known for keeping babies warm.

While it was once believed to disappear by adulthood, researchers now understand that some adults do maintain small amounts of brown fat. They hope this fat store can offer new ways to combat obesity, diabetes, and menopausal hot flashes.

Because the stores of brown fat in adults are small, finding and measuring it poses a challenge for researchers. Many have turned to expensive options, such as combined PET-CT scans. But others have found a lower-cost, safer, and more flexible solution in IR cameras.

One such researcher is Dr. Daniel E.  Brown, professor of anthropology at University of Hawaii Hilo. With a Ph.D. in biological anthropology, Brown’s has undertaken  recent research  including surveys of women at mid-life to examine ethnic differences in symptoms associated with menopause, as well as research on risk factors for type 2 diabetes in schoolchildren.

In a new pilot study of 20 menopausal women, Brown and his team are using IR cameras to measure changes in skin temperature – as a function of brown fat activity – after exposure to mildly cold water. The women in the study have all experienced hot flashes to varying degrees, from minor discomfort to severe heat, sweating, and rapid heartbeat. For this research, they’re asked to immerse one hand in a bucket of water for five minutes, causing brown adipose tissue to metabolize. An IR camera, trained on an area of skin above the collarbone that’s a target-rich area for monitoring brown fat function, takes “before and after” thermal pictures of the region to measure temperature change just below the skin surface.

“Even a ‘fumbler’ like me could get the IR camera and software to work,” said Brown. “The IR camera system is an elegant solution to a challenging measurement problem: it gets the accurate temperature measurement we need without the burden of physically connecting devices to the subject.”

While the results have been promising, Brown stresses these are early days of this important inquiry. If they find meaningful differences in how brown fat metabolizes in women who suffer hot flashes, a larger comparative study could be in order. Brown said there’s no doubt in his mind that IR cameras and the imaging software that supports them will be an essential part of future studies.

“If we scale this experiment to include many more women, the IR camera and software would play a key role in facilitating our data gathering and analysis,” said Brown. “As a researcher, that’s what I’m looking for in an enabling technology.”

Mosquito-borne illnesses, including malaria, dengue fever and Zika, are a pervasive and vexing problem affecting millions of people each year. Notably, by the end of August 2016, the World Health Organization reported evidence of Zika transmission in 72 countries. Amidst global efforts to control outbreaks of Zika and other mosquito-borne viruses, new initiatives are underway to develop natural mosquito repellants that can grow easily in affected regions.

While DEET, or N,N-Diethyl-meta-toluamide, is a proven mosquito repellant, it is a harsh chemical that is harmful if swallowed, and both the Centers for Disease Control and Prevention and Environmental Protection Agency recommend against spraying it directly onto the face. It is also hard to obtain in regions where it is needed most, namely where mosquito-borne viruses are most prevalent.

With the push on to develop naturally grown mosquito repellants, catnip has emerged as a potential game changer. Although catnip shares a problem with other natural repellants – its mosquito-repelling qualities wear off too quickly – researchers at Rutgers University have developed a new “super-catnip,” called CR9, in an attempt to enhance the bioactive compounds that repel mosquitos and make the plant easier to grow commercially.

Dr. James Simon and Ph.D. graduate student William Reichert, developers of CR9, are working to verify that the essential oils in their super-catnip are effective at repelling two common types of mosquitos – A. aegypti and A. gambiae. To do so, they first tried to chronicle mosquito behavior using a high-definition visual camera in night-vision mode, but the effort failed. The camera couldn’t provide the precision necessary in that light-challenged environment to produce an accurate mosquito count. Instead they turned to an IR camera.

“We needed a camera that could see in the dark – so we went with infrared,” explained Reichert.

The difference was night and day. 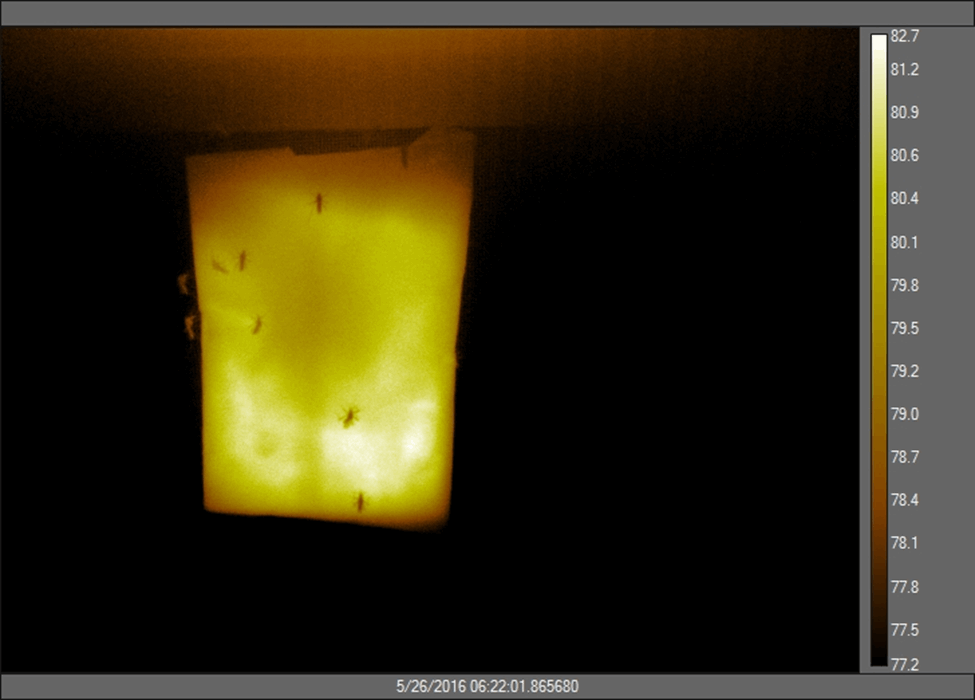 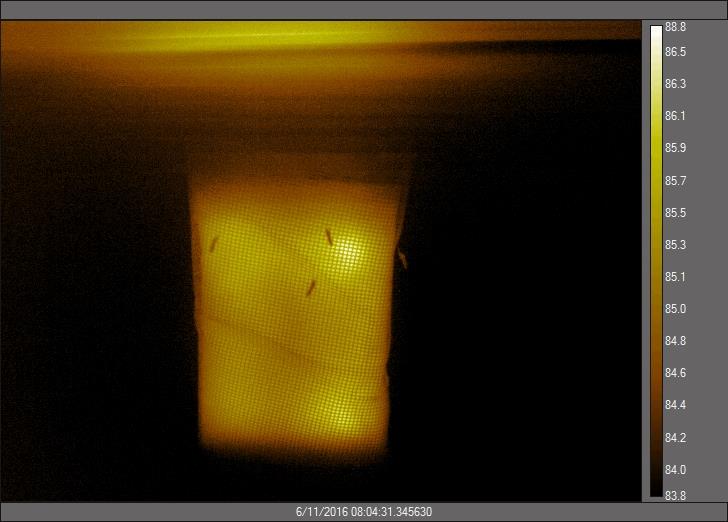 The IR camera and accompanying software enabled the researchers to record infrared images of mosquito behavior at 388 frames per second with a high degree of accuracy. The IR system also allowed them to freeze the insect’s motion to enable an accurate count.

“A lot of times these mosquitos will climb on each other and it will get crowded, so it’s hard to count them. But with a camera like this it was really easy. They just stood right out,” concluded Reichert.

Advances in reconstructive dentistry are giving patients more choices and more comfortable, sustainable, and cosmetically pleasing outcomes. Yet many procedures, including the making of implant posts, require drilling. Drilling produces not only heat, but also potentially dangerous spikes in temperature.

Understanding and monitoring temperature swings in dental procedures is critically important, because temperatures above 56 to 60°C harm bone tissue, and temperatures exceeding 47°C on the surface of the dental root can cause damage to surrounding tissues.

Doctors Joanna Bozyk and Janusz Kleinrok with the Medical University of Lublin in Poland teamed up with thermographers to examine the temperature impacts of various drilling procedures involved in developing posts. Essential to their study was the use of IR cameras in a controlled lab setting. The thermal imaging cameras were used to closely monitor and accurately measure thermal transients, i.e., rapid temperature changes, in the drilling process and across variables including the drill’s rotational speed, the type and size of dental drill used, and type of cooling method employed.

Figure 3. Left: The thermal image of a tooth during drilling without cooling. Right: Temperature diagram.

Figure 4. Left: The thermal image of a tooth during drilling with water cooling. Right: Temperature diagram.

In reviewing the data, it is clear IR cameras and the software that supports them give researchers and dental-device manufacturers the ability to see, chart, and understand with precision the critical temperature changes that occur during drilling. They’re getting the correct measurement in exactly the right place – something that is difficult for legacy temperature measurement approaches. This capability gives dental-device manufacturers concrete evidence to support claims that their products can and will perform within safety specifications, while offering the professionals who use them confidence they will deliver safe and healthy outcomes to their patients.

When the frontier of medical discovery lies in places that are hard to see or reach, gaining accurate temperature measurements can be extremely difficult. The versatility, affordability, and high performance of IR cameras are proving a powerful remedy to this problem, improving upon legacy temperature measurement approaches while helping medical researchers discover and innovate. Embracing these increasingly nimble measurement tools, the medical research community today is bringing IR cameras to the forefront of discovery and insight, unlocking tomorrow’s breakthrough treatments.